What is the difference between British English and American English?

To the untrained ear, British English and American English sound almost the same. But don’t be fooled: there are many differences between the two. You’ll start noticing it once your English gets better. But don’t worry too much about that, as there’s a list of them below!

The accent may be the most obvious difference of all. Americans tend to speak quite slowly and use ‘harsh’ vowels. Also, they pronounce the letter ‘R’ very obviously but their ‘Ts’ and ‘Ds’ often sound the same. British people tend to speak faster and often don’t pronounce the letter ‘R’ at all. Funnily enough, they either pronounce ‘Ts’ very obviously or not at all. This leads to English people pronouncing the word ‘water’ as ‘woh-tah’ or ‘woh-ah’. Americans do it differently and pronounce it as ‘wadderr’.

If you use American or British spelling can matter to some. Many British people are fiercely proud of their ‘correct’ ways of spelling words. A great deal of them were very angry when supermarkets stopped using the British spelling of the word ‘yoghurt’. They ‘dropped’ the ‘h’ and started using the American spelling (‘yogurt’) instead!

Americans often feel like they’re listening to a different language when they hear British expressions. Tell them that someone “threw a wobbly when his mate was fannying around”. This means: someone got angry because their friend was not hurrying up. Most likely, they will not understand a word of it! However, there don’t tend to be many American expressions that the British don’t already use. 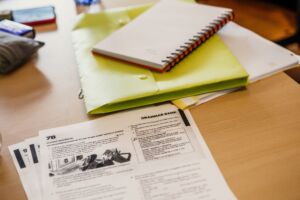 Ever wondered how to pronounce British place names like Leicester, Loughborough and Edinburgh? Americans do all the time! American place names tend to be pronounced as they’re written, whereas British pronunciations are not obvious at all. In case you’re wondering, the above 3 city names are pronounced as Lester, Loffbruh and Eddinbruh. Makes sense, right?

A thing you’ll notice is that Americans like to spell words the way they are pronounced. This leads to words like ‘labor’ and neighbor’. However, the British spell these words with an extra ‘U’: ‘labour’ and ‘neighbour’. Another noticeable difference is the American use of the ‘Z’ in ‘realize’ and ‘organize’. The British spelling will always use an ‘S’ for these words: ‘realise’ and ‘organise’.

If you say to an American that you “have a hole in your pants” they may feel a little sorry for you. Say the same to a British person, they will laugh or think that you’re a little strange. This is because the word ‘pants’ refers to ‘trousers’ to an American. To British people it refers to ‘underwear’!

Don’t let the differences hold you back!

Clearly, there are differences between British and American uses of English. Most of the time, Americans and the British can each other just fine!

If you feel your English is advancing, there are some great further tips available. Or, why not check out a Mixtree Language course?